New treatment for the most serious form of stroke 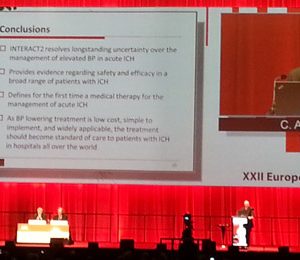 Craig Anderson, Senior Director at The George Institute, unveiling results of INTERACT2 at the European Stroke Conference in May 2013

Intracerebral hemorrhage is the most serious form of stroke with high rates of mortality and a low chance of recovery to functional independence. In Asia-Pacific, it affects more than one million people annually, kills one third of them and leaves most survivors with disability. For reasons yet unknown, intracerebral hemorrhage is also more prevalent in the Asian population.

Elevated blood pressure is very common among patients with acute stroke, particularly so in those with ICH and is a strong predictor of poor outcomes. Current guidelines have recommended a conservative approach to BP control (<180 mm Hg) although this was acknowledged not to be based on based on robust evidence.

INTERACT2 is a landmark study that revealed a new way to treat intracerebral haemorrhage.  This study involved more than 2800 patients from 140 hospitals around the world, and is the largest study of its kind. Three quarters of the patients came from Asia-Pacific.

The results of INTERACT2 resolved the uncertainty over the management of elevated BP in ICH. It showed that intensive blood pressure lowering (<140 mm Hg) in patients with intracerebral haemorrhage reduced the risk of major disability and improved chances of recovery by as much as 20 per cent. Moreover, it was also shown to be very safe, with no difference in mortality or serious adverse events between the randomised groups. This is an important discovery as previous trials of therapies in this patient population have failed to show improvement in outcomes.

The impact of INTERACT2 is particularly relevant to Asia-Pacific as well. It demonstrates that a management policy of rapid blood pressure reduction using locally available agents is effective at improving recovery and reducing future disability. Treatments such as mechanical thrombectomy and tissue plasminogen activators are still regarded as inaccessible in Asia-Pacific due to cost, infrastructure and lack of expertise. From a global perspective, this advancement also gives patients a welcome addition to high risk surgery.

However the main results of INTERACT2 may not be considered as robust as some people may wish. There is also ongoing uncertainty over the beneficial effects of early intensive BP lowering. More data from the ongoing ATACH II trial may further strengthen the evidence shown in INTERACT2.  Furthermore, there is a recognized gap between best evidence and evidence based practice which would inhibit the timely incorporation of a safe and effective treatment into clinical practice.

Therefore, further study is required to quantify the safety and beneficial effects of early intensive BP lowering in a broader population of patients, and also define the pathway to overcome barriers of incorporating this evidence into clinical practice efficiently.