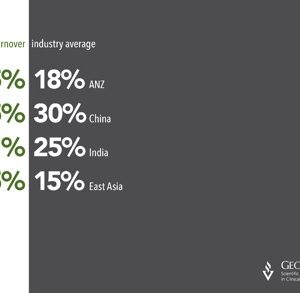 The cost of employee turnover in a Clinical Research Organisation (CRO) is high, as it weakens the relationship with the project sponsor. Research shows that in 2012, the CRO industry in the United States experienced a 12.5% voluntary turnover, compared to an average national voluntary turnover rate of 1.5%.

During the 2015 financial year, George Clinical (GC) is pleased to announce that it maintained a staff turnover rate that was below industry average, evident in the figure above. With offices in the Asia-Pacific, United States and Europe, GC strives on creating a positive work environment, building constructive relationships with line managers and constant motivation to succeed – these areas has contributed to this outcome.

Having a stable team of personnel allows GC to focus on quality operational services.  Lower staff turnover means that more time is spent on operational delivery rather than managing personnel changes.