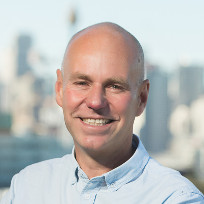 George Clinical is pleased to announce that Dr. Bruce Neal has been appointed Executive Director of The George Institute Australia effective September 1.   Neal was a founding member of the Institute, together with John Chalmers and Principal Directors Stephen MacMahon and Robyn Norton.  Neal has contributed to the growth of the Institute across many areas including its clinical trials, cardiometabolic diseases research and food policy program.

“For the past two years, Bruce has been Deputy Executive Director of The George Institute Australia. In this position he has demonstrated great leadership skills that will support the continued growth and success of the Australian center,” said Dr. Stephen MacMahon, Principal Director of The George Institute for Global Health.  “His significant personal research accomplishments in these areas have kept him in the Clarivate Analytics Highly Cited Researchers List for several years. Beyond Australia, Bruce is also committed to building partnerships with our other regional centers in China, India and the U.K. which will be a major focus for our future growth plans.”

George Clinical works with the Institute on numerous studies and supports the organization operationally across the globe.  The George Clinical team anticipates working closely with Neal pursuing new projects as well as collaborating with his scientific team regularly operationalizing trials and studies.

Former Executive Director of The George Institute Australia, Dr. Vlado Perkovic was recently appointed as the Dean of Medicine at the University of New South Wales.  The Institute announced its ongoing research alliance with UNSW in 2017 and it is anticipated that Neal’s appointment will further strengthen collaboration between the two organizations.

“As we celebrate twenty years since the Institute was first established in Sydney, I’m proud of what we have been able to accomplish in terms of improving health outcomes for people in many countries,” said Neal. “But while around half of the world’s population has one or more long-term medical conditions such as diabetes, hypertension or depression, we still have much to do.  I’m looking forward to facing this challenge with the Institute’s many academic, government and NGO partners and collaborators.”

Neal is Professor of Medicine at UNSW Sydney, Executive Director of The George Institute Australia and Professor of Clinical Epidemiology at Imperial College London.  He completed his medical training at Bristol University in the U.K. in 1990 and worked four years in clinical posts. Prior to taking up his position at the Institute in 1999 he trained in epidemiology at the Clinical Trials Research Unit in Auckland, where he completed his Ph.D. in Medicine. Neal has research expertise in the management of high blood pressure and diabetes and has played lead roles in multiple large-scale clinical trials, most recently of SGLT2 inhibition.